Today we celebrate David Bowie’s 70th birthday and mark a year of his passing. Let us remember how great artist he was: 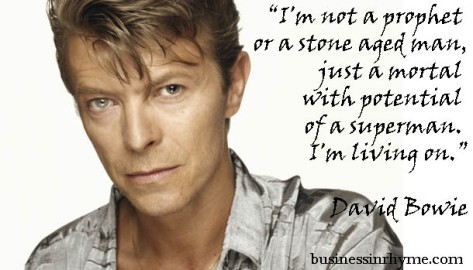 Ever since I was a little kid, as a great fan of gothic and mythological stories, my first recollection of David Bowie has to do with his role in the movie Hunger. Along with that came an interest in his music and artistic work, which later translated in true admiration.

With his passing about a month ago I also felt propelled like many before me, to say few words about his inevitable influence, not only in the world of music, but also in my personal view on the creative process in general.

These are 4 creativity lessons we can learn from his rich and long career:

One thing that accompany of all Bowie’s creative endeavors is challenging the ‘status quo’ of every artistic expression and just experimenting in his constant search for fresh and new ideas. Flirting with fantasy and experiential performance lead Bowie to pretty much shake up the established view of rock n roll in the sixties and early seventies and made him one of the biggest icons of glam rock movement.

As a multi-talented artist, Bowie never shied from collaborating with musicians, dancers, fashion designers, movie makers – which only accentuated his innate creativity on so many different levels. I’m not going to list all of his movies, performances and albums he recorded but his almost 5 decade long career has proved so many times that when you are an artist, you are artist with all of your mind and body; you use everything you’ve got and that’s when creative miracles happen.

On many occasions, artists that collaborated with Bowie, being that long-term associates or single-project cooperation, rarely would negatively comment about his approach to work. Brian Eno, Eggy Pop, Brian Molko.. describe him as a patient colleague, open-minded to other’s people opinions, which always delivered productive, creative outlet.

Bowie is very well known for unexpected career maneuver when at the top of popularity, he just ‘retired’ Ziggy Stardust, (his alter ego as it is referred to) and many speculated if Bowie is going to play live again. But what really happened is that Bowie managed to detach from that momentary success and allow himself to dive into something new, risky – simply to reinvent himself. That type of approach to work gave him the opportunity to enjoy his creative process in all its strength, managing to subside identity crisis into which many stars inevitably fall. As he did assume many fictional personalities he was very comfortable in ‘his own skin’, letting his true self to just explore and enjoy creative journey.

As a final thought, I would emphasize here that we all have that creative force within us; in order to let it flourish we need to allow ourselves to be more open-minded and willing to step-back from the outcome – what ever it might be. Once we accept that, creativity becomes simply a way of life.

The Man Who Sold The World

We passed upon the stair,
We spoke of was and when,
Although I wasn’t there,
He said I was his friend,
Which came as some surprise.
I spoke into his eyes,
“I thought you died alone
A long long time ago.”

“Oh no, not me,
I never lost control
You’re face to face
With the man who sold the world.”

I laughed and shook his hand
And made my way back home,
I searched for form and land,
For years and years I roamed.
I gazed a gazley stare
At all the millions here:
“We must have died alone,
A long long time ago.”

“Who knows? Not me,
We never lost control.
You’re face to face
With the man who sold the world.”

“Who knows? Not me,
We never lost control.
You’re face to face
With the man who sold the world.