When you invite people to share in your miracle, you create future allies during rough weather.”
― Shannon L. Alder

In this post I intent to recommend some interesting writing exercises, but they are supposed to be done in groups. So grab some of your “pen-friends”, 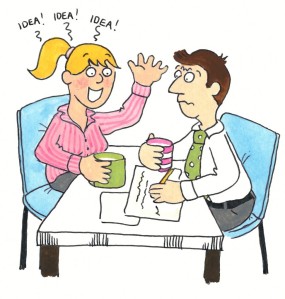 play together and see how can you inspire and help each other become more creative.

These exercises can be also performed in the business setting, they’re fun and can be a great way to break out of the ordinary working routine.

Each of you, players, has to write down a rare fact about yourself that most people don’t know about (it can be a secret 😉 ) on a piece of paper, fold it and exchange it with others randomly. Caught by surprise about unknown facts you may find your own fountain of creativity! Write a poem about it and see where it takes you.

Let one of your friends or coworkers gesture with hands: your task is to describe what you see, what you experience and jot it down in words in the form of poem. This can be quite intriguing way of stimulating our creative capabilities, as is discussed in this article, using two hands to explain something prompts the brain to consider issues from multiple perspectives. To spice up a bit, try everything that you write to put in rhyme (in my previous post I explained the benefits of putting boundaries during our brainstorming sessions and how that can stimulate creativity further).

What’s wrong with this picture?

Visual stimulation can unleash your imagination in the most exciting ways. You can pick some random picture and each of players has to make a story in the form of poem, inspired by the picture. Afterwards, you can all debate and see whose story is the most interesting or you can take it step further and compile all stories into one: it has to be believable and follow some logical structure. It’s best suited for groups of two, three people.

With certain moderation you can use these ideas for your own creativity exercises. If you by any chance try them, share your thoughts in the comments below.

It couldn’t be done by Edgar Albert Guest

Somebody said that it couldn’t be done,
But, he with a chuckle replied
That “maybe it couldn’t,” but he would be one
Who wouldn’t say so till he’d tried.
So he buckled right in with the trace of a grin
On his face. If he worried he hid it.
He started to sing as he tackled the thing
That couldn’t be done, and he did it.

Somebody scoffed: “Oh, you’ll never do that;
At least no one has done it”;
But he took off his coat and he took off his hat,
And the first thing we knew he’d begun it.
With a lift of his chin and a bit of a grin,
Without any doubting or quiddit,
He started to sing as he tackled the thing
That couldn’t be done, and he did it.

One thought on “Exercise your creativity through poetry, part II”